Text of the Introductor Address Delivered by Professor Regina uí Chollatáin on 18 March 2022, on the Occasion of the Conferring of the Degree of Doctor of Literature, Honoris Causa on Tríona Ní Dhomhnaill

Both as a student and professional musician, Tríona Ní Dhomhnaill represents the very essence of UCD’s proud and extensive influence on the Irish folk music revival of the 1960s and 1970s. One of Ireland’s most beloved Irish singers, she has been acknowledged and appreciated on the world stage for her unique understanding of Irish traditional music, drawing extensive influence from the Donegal song tradition. Her distinctive voice and mastery of the keyboard contributed uniquely to the fiery underpinnings and rhythmic attacks of the Bothy Band. While a student at UCD, studying French and Archaeology, Triona was first introduced to the vibrant traditional music scene in Dublin, then playing with fellow founding members of the influential Bothy Band, Matt Molloy, Paddy Kennan, Mícheál Ó Domhnaill, Paddy Glackin, and Donal Lunny. Triona’s unique vocal talents would provide the melodic base of the band’s acclaimed and influential sound, profoundly contributing to the contemporary cultural heritage of UCD.

Her vocal influence would in turn contribute significantly to the revival and reinterpretation of Irish traditional music in the 1970s, combining the enduring power of traditional melodies with the musical daring of her contemporaries, altering many approaches to this genre of music in Ireland and abroad. Tríona Ní Dhomhnaill’s extensive musical career in the United States after the disbandment of the Bothy Band, is additionally notable for the promotion of both Irish traditional music and the Irish language to an international audience. Her success is a testament to an enduring musical talent and unique ability to capture the imagination of international audiences.

Although raised in Meath, Tríona Ní Dhomhnaill has always possessed a respect and deep affection for the Donegal musical tradition of her family. This understanding of the tradition and inherent beauty of Irish folk music is a central component to her musical approach leading her to become one of Ireland’s most cherished singer/songwriters. She first rose to prominence during the folk revival of the 1970s as a member of the seminal band, Skara Brae. The group’s single album is one of the most influential Irish recordings ever. After Skara Brae’s disbandment, she joined the Bothy Band and to this day their recordings are still regarded as the most prominent of the folk music revival of the 1970s with Tríona Ní Dhomhnaill’s vocal contribution providing a distinct musical identity and impact. In 1979, she moved to the United States, becoming an accomplished member of the bands Touchstone, Relativity, and Nightnoise. Her international success has been vital in the promotion of the Irish language and culture abroad. She has released two solo albums: Tríona (1975) and The Key’s Within (2010). Alongside her sister, Maighread Ní Dhomhnail’s 1999 recording, Idir an Dá Sholas/ Between Two Lights is considered a career milestone.

As an accomplished composer, musician and singer firmly rooted in her own tradition Tríona Ní Dhomhnaill is a worthy recipient of this Honorary Doctorate on many levels; the influence she continues to wield on Irish traditional music in a national and international context is remarkable. The legacy she has created for an upcoming generation of musicians and composers of traditional music through the medium of English and Irish has opened new opportunities and plays a significant role in shaping a new vision for traditional musicians. This Doctorate honouring Tríona Ní Dhomhnaill’s endeavour and commitment also confers a valuable quality to the Creative Arts in the complicated context of the links between art and humanity, a relationship which is growing in importance in the complicated, diverse, and wonderful worlds we share. 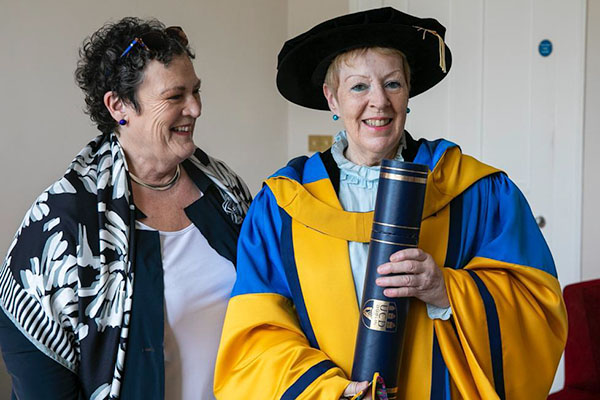